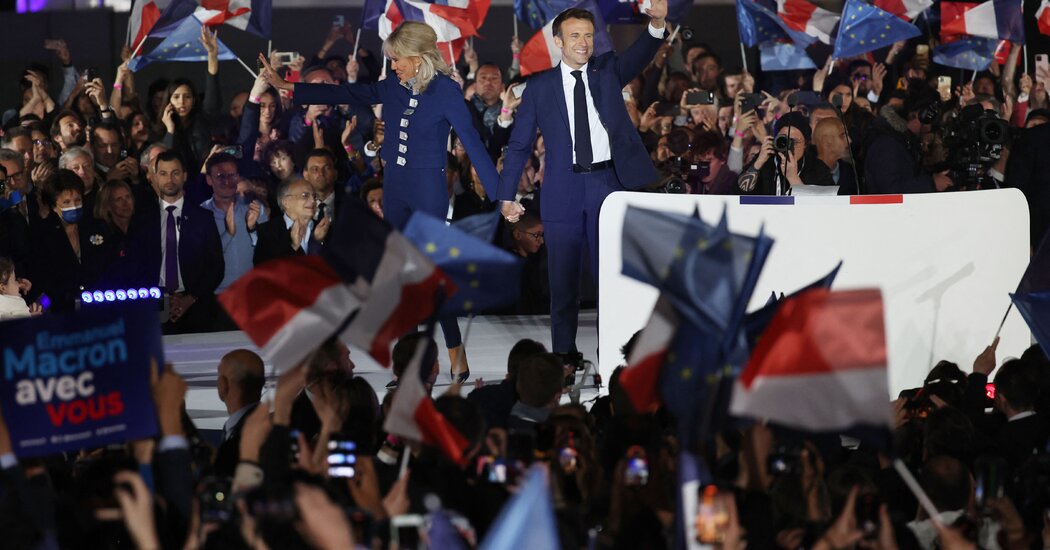 
Good morning. We’re covering President Emmanuel Macron’s victory in France, an announced visit by top U.S. officials to Kyiv and a power re-calibration in the Pacific.

President Emmanuel Macron of France has won a second term, defeating the far-right leader Marine Le Pen in a close competition and becoming the first French president to be re-elected in 20 years.

Early projections showed Macron, a centrist, gaining 58.5 percent of the vote to Le Pen’s 41.5 percent. His victory was much narrower than in 2017, when the margin was 66.1 percent to 33.9 percent for Le Pen, but wider than appeared likely two weeks ago.

The contest hinged on economic issues, and Macron, distracted by his fruitless Russia diplomacy, seldom showed real concern for the financial difficulties many French have faced during the pandemic and the war.

But his promise of stability and his effective stewardship over the Covid-19 crisis appear to have prevailed over the strong temptation of an extremist lurch toward nationalism.

Analysis: Le Pen, the leader of an anti-immigrant movement, tried to focus on economic policy in an effort to sanitize her image without softening her xenophobic program, and brought the extreme right closer to power than at any time since 1944.

Russia: The election has profound effects on the war in Ukraine. Le Pen, who owes millions to a Russian bank, is a longtime Moscow ally and heads a party hostile to NATO. European officials immediately expressed their relief after Macron’s victory.

Ukrainian forces are still in full control of the Azovstal steel plant in Mariupol and have repelled continuous assaults by Russian infantry, a commander told The Times on Sunday.

He said his forces were willing to leave the factory and evacuate the city if given guarantees of safe passage for themselves and hundreds of civilians. Satellite images appear to show a growing mass grave on the city’s outskirts, and the mayor said that “at least 15,000 elderly and those with chronic diseases may die.”

Diplomatic winds blew strong in Kyiv, as President Volodymyr Zelensky prepared to meet with the U.S. secretary of state, Antony Blinken, and the defense secretary, Lloyd Austin. Details of their trip had not yet been released.

Fighting continues to rage in the country’s east. Russia, which has taken more than three dozen small towns in the region, ignored calls for a cease-fire during the Orthodox Easter holiday. Its missiles struck the port city of Odesa — which has been largely spared attacks on its civilians — killing at least eight people. But Ukrainian soldiers are still fighting fiercely. Follow live updates here.

Context: Weapons are flowing into Ukraine from the West, and the U.S. has pledged more military aid, including drones that explode on impact. Zelensky said Ukraine had begun to receive the sort of heavy weaponry it needed, and he promised victory.

Power shifts in the Pacific region

As China moves to expand its influence in the Asia-Pacific region, New Zealand and Japan have announced a goal of “seamless” sharing of classified information.

In the announcement, Prime Minister Jacinda Ardern of New Zealand and Prime Minister Fumio Kishida of Japan spoke of “growing strategic challenges” in the Pacific. Two days earlier, the Solomon Islands said it had reached a security agreement with China, which provoked unease among Western-aligned powers in the region.

Ardern and Kishida also highlighted their opposition to “unilateral actions that seek to alter the status quo by force” in the East and South China seas, most likely a reference to Beijing’s efforts to construct artificial islands for military use and encroach on disputed territories.

Analysis: Tokyo has long tried to join the “Five Eyes” intelligence partnership, through which the United States, Britain, Canada, Australia and New Zealand share intelligence. Members were concerned about the security of the Japanese intelligence community, but the country has overhauled its methods.

Background: New Zealand has itself faced questions about its reliability as an intelligence partner because it is so economically dependent on China, by far the largest purchaser of its exports.

Asia and The Pacific

In New York City, Chinatown’s civic groups have long used their coveted real estate portfolio to hold back encroaching gentrification. But the pandemic introduced new costs, which could force the graying owners to sell and dramatically upend the neighborhood’s delicate balance.

These iconic public spaces, and others, came from the vision of the landscape architect Frederick Law Olmsted, born 200 years ago on April 26. His creations are more essential to American life than ever, Audra D. S. Burch writes in The Times.

Olmsted saw parks as an oasis, a haven for fresh air and safety. “The park should, as far as possible, complement the town,” he wrote. “Openness is the one thing you cannot get in buildings.” During the pandemic, Audra writes, “his parks helped sustain Americans’ mental and physical health and social connections.”

Some of his parks also became the staging grounds for social justice protests. “Olmsted understood the promise of the park as a social force that would become an amenity in city life over the decades,” Audra writes. He saw parks as sites of healing, “literal common grounds forging communities, unstratified by race or class or faith.”

“The young nation that Olmsted served might be unrecognizable to him today,” Audra continues, “except for the rituals preserved and encouraged by his own creations:

I highly encourage you to take a trip through Olmstead’s creations, and view more of Ruth Fremson’s stunning photos, here.