HomeLatest NewsWhen Will the Tourists Be Back? 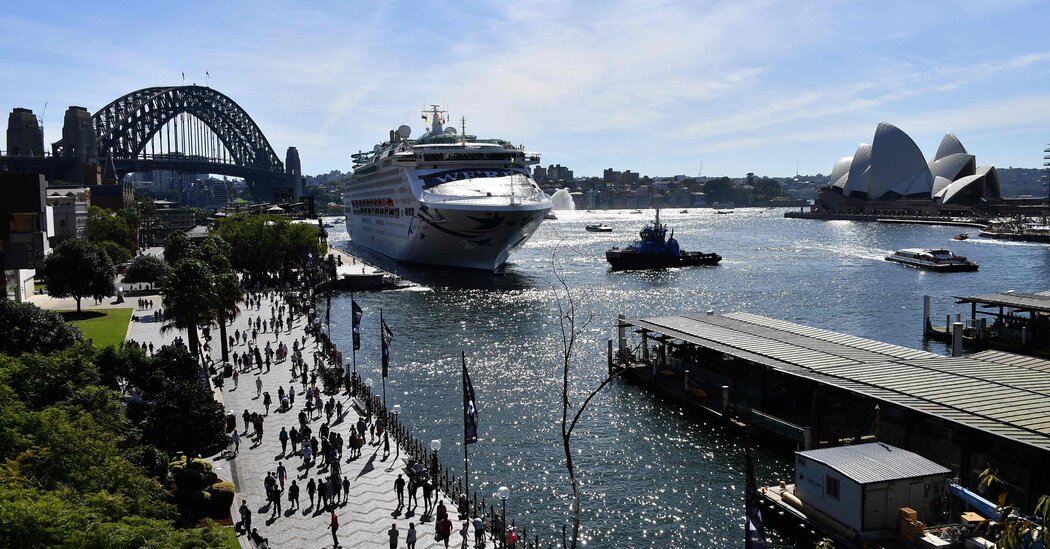 When Will the Tourists Be Back?

An industry weathering a long winter looks warily at the months — or years — ahead.

The Australia Letter is a weekly newsletter from our Australia bureau. Sign up to get it by email.

The cruise ships are back! More than two years after they were first banished from Australian waters, a first hulking ocean liner measuring more than 850 feet in length floated lazily into Sydney Harbor on Monday. It sported an enormous navy-blue sign, slung over its bow: “We’re home.”

Late last year, after Australia reopened its long-closed borders, a trickle of tourists began to make their way down under, first from Singapore and New Zealand, and then from everywhere else. As of this month, an average of 675 international flights are headed to Australia each week, according to data from Cirium. That number is forecast to rise to almost 1,000 by June.

Compared to the desolate scenes at Australia’s airports throughout most of the last two years, it’s a dizzying number of flights — though still less than half as many as in 2019, when roughly 2,000 international flights touched down in Australia each week, bringing a total of 9.4 million visitors over the year.

Bringing international tourists back is going to be hard work. Though the federal government recently announced that it would be putting 147 million Australian dollars, or about $108 million, toward supporting tourism, it’s small potatoes for an industry that lost almost 80 billion Australian dollars, or $59 billion, in visitor expenditure in 2020 alone, according to Deloitte.

Add in the rising cost of just about everything, including airfares, and China’s extremely restrictive border policies, and some analysts have forecast a recovery that might take years. It’s the same story, if not more so, in New Zealand, which is yet to open to tourists from anywhere other than Australia.

“I don’t know whether we will get back to pre-Covid levels,” Margy Osmond, the chief executive of the Tourism and Transport Forum, told the Australian Financial Review earlier this year. Competition is fierce, she added: “Every market in the world is now after the shy international travelers.”

There’s another knock-on effect. Australia issues “working holiday” visas to young people from around the world, who are also classified as tourists. The rough idea: You spend a year or so working, perhaps as a server or behind the bar, then take whatever you’ve managed to save to see a bit more of the country. Australia’s hospitality industry relies heavily on these young people for many customer-facing roles, especially in more rural or remote areas.

So far, not enough of them have come back. In Melbourne, where I live, some restaurants are shutting up shop because they simply can’t find enough hospitality workers. SPQR Cucina, a pizzeria in the leafy suburb of Mont Albert, this week announced on Instagram that it would be closing, for now: “Due to the current shortage of hospitality staff, we simply can’t operate at this time and plan to be open again by mid year.”

And for some tourism operators, a two-year winter has forced a new approach that may outlast the pandemic altogether.

Early last year, I interviewed Nadine Toe Toe, an Indigenous New Zealander who runs a family-owned lodge in the New Zealand village of Murupara. Before the pandemic, about 98 percent of the company’s customers had come from overseas, she told me. But to respond to the immediate needs of a domestic tourism market, they’d had no choice but to pivot altogether.

“Before Covid, it was always our culture that was at the forefront — that we can proudly stand there and tell the world who we are, where we’re from, why it’s important to be Maori,” she said. “We are no longer a cultural tourism experience. We are now a lakeside accommodation.”

Now for this week’s stories.

Are you enjoying our Australia bureau dispatches?
Tell us what you think at [email protected].

Like this email?
Forward it to your friends (they could use a little fresh perspective, right?) and let them know they can sign up here.