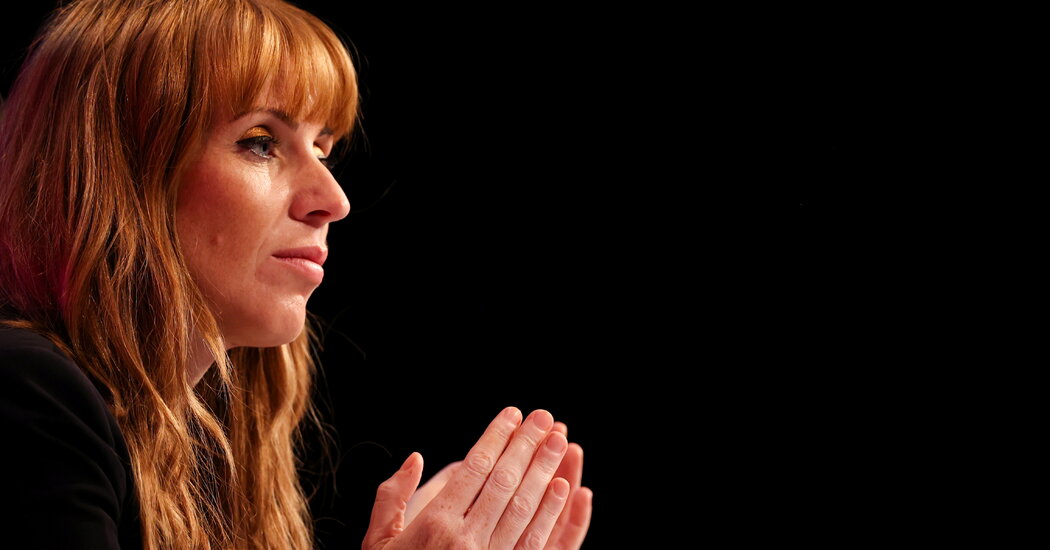 
LONDON — An anonymously sourced report by one of Britain’s freewheeling tabloid newspapers has sparked a debate over both tabloid journalistic ethics and sexism in Parliament, leading some to question whether the institution is capable shedding its fusty reputation and becoming an inclusive workplace.

Over the weekend the tabloid, The Mail on Sunday, reported an anonymous claim by a Conservative lawmaker that Angela Rayner, deputy leader of the opposition Labour Party, had tried distracting Prime Minister Boris Johnson in Parliament by crossing and uncrossing her legs, comparing her to Sharon Stone’s character in the film “Basic Instinct.”

Ms. Rayner said the article had left her “crestfallen.” It was dismissed by Mr. Johnson as “sexist, misogynist, tripe,” and prompted more than 5,500 complaints, according to the independent regulator of most of Britain’s newspapers and magazines. The Speaker of the House of Commons, Lindsay Hoyle, summoned the newspaper’s editor, David Dillon, and its political editor, Glen Owen, to a meeting on Wednesday.

“The story is that there is misogyny alive and well and stalking the corridors of the House of Commons,” said Harriet Harman, the longest-serving female lawmaker and a lifelong champion of women’s rights. It was, she told LBC Radio, symptomatic of “the backlash you always get when women are making progress,” adding that “there are some men that feel they’ve got to put them back.”

There are 454 women and 963 men in the House of Commons and House of Lords. Before the last general election in 2019, a number of female politicians said harassment and abuse had driven some out of politics; many rights groups worry that the culture in Parliament has deterred others from coming forward at all to run for office.

Repeated phone calls and emails to The Mail on Sunday went unanswered.

Jemima Olchawski, the chief officer of the Fawcett Society, a leading British charity that supports gender equality and women’s rights said in a statement, “This behavior cannot be tolerated — as a nation we cannot and should not accept this.” She noted that her organization had long campaigned for “systemic changes to fix Parliament’s culture and make it a more inclusive and diverse workplace.”

Aside from its sexist tone and content, the article also contrasted Ms. Rayner’s start in life with Mr. Johnson’s elite education and his public speaking skills honed at the Oxford Union, the university’s famous debating society. Born working class, she was a young single mother who has risen to one of the most prominent jobs in British politics.

Ms. Rayner has also won praise for her debating style while standing in at several sessions of Prime Minister’s questions, the weekly verbal duel between party leaders in Parliament.

In a TV interview on Tuesday Ms. Rayner described how, when contacted by The Mail on Sunday, she told the paper the claim was untrue, asked them not to publish it and was “crestfallen” about the impact it might have on her teenage sons.

The article was steeped in class bias, she told ITV, focusing on “where I come from and how I grew up,” and suggesting that, because of her standard, state-school education she was “stupid.”

“They talk about my background because I had a child when I was young as if to say I am promiscuous — that was the insinuation, which I felt was quite offensive,” Ms. Rayner added.

After the article’s publication, several lawmakers expressed support for Ms. Rayner and voiced fears about damage to the reputation of a Parliament that has faced several scandals in recent years. On the same day as The Mail on Sunday was writing about Ms. Rayner, the Sunday Times of London reported that three cabinet ministers and two senior Labour politicians were among 56 lawmakers facing allegations of bullying, harassment and sexual misconduct.

Jane Merrick, policy editor at the i newspaper — who was among those named as person of the year by Time magazine in 2017 for talking publicly about sexual abuse and harassment in Parliament — criticized the article, pointing out that Ms. Rayner often outperformed Mr. Johnson in debate. “To reduce this to what she’s wearing and how she behaves, I think is ludicrous, but also completely steeped in misogyny,” she said.

Ms. Merrick added that the workplace culture had improved in Parliament since she began working there more than two decades ago, but that it was depressing that more still needed to be done.

“I think there was a kind of a rush of optimism when Me Too happened that we would suddenly change people’s behavior, and, of course, that never happened,” she said.

“This wouldn’t be a story at all if Westminster and the wider political system in the U.K. weren’t riddled with misogyny,” she said in a statement. She also pointed to “the misogyny of the media, which both deters women from involvement and misrepresents and undersells their achievements when they do engage.”

Many have long criticized a culture in Parliament where the number of female lawmakers is not yet reflective of the communities they represent.

Speaking on Monday, Mr. Johnson said he had offered Ms. Rayner his support and had promised that if the source of the article were uncovered, then the “terrors of the earth” would be unleashed upon them.

That person, he said, was not giving an authorized briefing.

James Heappey, a junior defense minister, on Tuesday told the BBC that he worried about the damage to the reputation of a Parliament that was “in a bad place right now,” and described the incident as “offensive and ridiculous.”

As for his anonymous fellow Conservative lawmaker who inspired the report, Mr. Heappey described them as an “idiot of a colleague.”