HomeLatest NewsStanding in the path of war, a small Ukrainian town braces as... 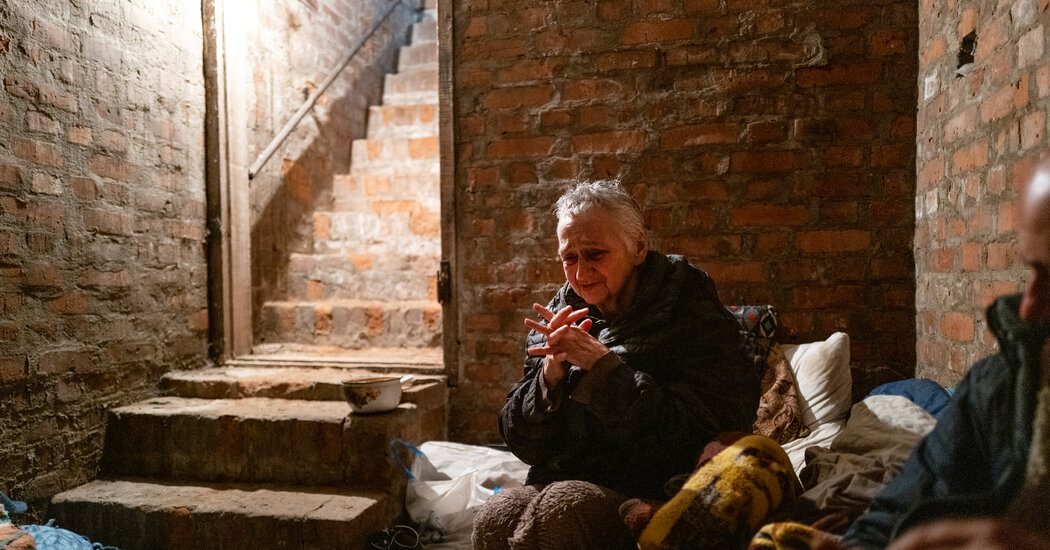 Standing in the path of war, a small Ukrainian town braces as Russians advance.


ORIKHIV, Ukraine — Squeezed between the Ukrainian and Russian front lines in an increasingly volatile battlefield in southeastern Ukraine, the small town of Orikhiv is constantly under fire, and Tamara Mikheenko, one of the few residents who remain, rarely leaves her basement.

“All the time in the basements, at night, under fire,” Ms. Mikheenko, 70, said as yet another explosion thumped outside. “It’s very scary, like a lightning bolt, everything is falling apart, the house is falling apart.”

Struggling to communicate through tremendous sobs on Tuesday, Ms. Mikheenko begged world leaders, including the presidents of the United States, Russia and Ukraine, to do whatever was necessary to stop the savagery, even as Russian forces appeared to be preparing a large offensive that officials said could steamroll Orikhiv in the coming days.

“Let them agree to stop this madness,” she said.

The night before, an explosion had ripped into the unoccupied house next door, violently jolting the dark cellar Ms. Mikheenko was hiding in.

Orikhiv lies among a small constellation of tidy farming villages standing right in the path of Russian troops advancing from the south and east. Ukrainian officials believe Russian forces are preparing to make a major push forward in an attempt to expand a stretch of territory they seized in the opening days of the war.

Shelling along this front has intensified in recent days, and all over the region Ukrainian forces are digging new trenches and fortifying positions.

It is in and around these villages, still home to goats, cows and chickens, but to fewer and fewer people, that the current, pivotal phase of the war is being fought. After failing to take the capital, Kyiv, and meeting as yet impenetrable resistance along Ukraine’s Black Sea coast, President Vladimir V. Putin of Russia has turned the remaining might of his army on the fertile plains east of Ukraine’s Dnipro River and a few key major cities.

Already, Russian forces have gobbled up nearly 80 percent of the Donbas region, as well as a ribbon of land connecting Russian territory to the Crimean Peninsula, which Mr. Putin annexed in 2014. One by one, the towns south and east of Orikhiv have fallen into Russian hands.

Ukraine’s forces, primarily from the 128th Separate Mountain Assault Brigade, are now dug into the wooded patches around and between these villages and the vast fields of wheat and sunflowers that are tended by their residents. Soldiers from the brigade say they are preparing to halt the expected Russian offensive and even to push the Russian lines back.

But should Orikhiv also fall, Russian forces will have a nearly open path to the large industrial metropolis of Zaporizhzhia, just under 40 miles away. Zaporizhzhia’s prewar population of about 750,000 has swelled with the daily arrival of evacuees from nearby territory now occupied by Russian forces, including the battered port city of Mariupol.

Around Zaporizhzhia, a sense of impending danger is palpable. Air raid sirens now sound several times a day and the local military hospital is filled with troops coming in from the front lines with ghastly injuries. On Tuesday, Russia’s military launched a rocket attack against targets inside the city, narrowly missing its nuclear power plant, the largest in Europe when fully operational, according to officials. The rockets hit a city utility, killing one person, though the local government provided no further details.

Since the start of the war on Feb. 24, rocket attacks have been rare in Zaporizhzhia. Not so in Orikhiv. The town is just three miles from the Russian lines, and shelling occurs around the clock, becoming particularly intense in the evenings. Several houses were hit overnight on Tuesday, including the one belonging to Ms. Mikheenko’s neighbor, Vitaliy Kononenko.

“This is what the Russian world has brought us,” Mr. Kononkenko said, inspecting the large hole punched through the front of his home. Inside, plastic ceiling panels had melted and the fur of a large teddy bear sitting in the window of a child’s room was singed.

The house, which Mr. Kononenko said he had recently finished building, would have burned to the ground had Ms. Mikheenko’s son, Aleksandr, not dashed from the basement to put it out.

Orikhiv’s mayor, Kostyantin Denisov, said that, miraculously, the city has suffered no casualties despite the constant shelling. This is partly because of the decision early on to evacuate as many people as possible. Today, only about 30 percent of the city’s prewar population of 20,000 remains, he said.

Some of those still in the city, like Ms. Mikheenko, stay holed up in their basements, but not everyone does. On Tuesday, among the clusters of neat single-family homes was the occasional resident fussing about in a beautiful blooming front garden. The sounds of gunfire, apparently target practice, sounded in the distance.

Mr. Denisov has stayed in place, refusing to leave his office in the peach-colored City Hall building. He is needed, he said, to help with the city’s defense. It is not an easy task, as the 251-year-old town was once located on a number of trade routes and has at least seven roads leading into it.

“Now we have to close these routes off from our uninvited guests,” he said. “That’s our main task. We won’t surrender.”

The towns running horizontally along the southeastern Ukrainian front are like touchstones marking the course of the Russian advance. Polohy, about 25 miles to the east of Orikhiv, has already fallen to Russian forces.

To the northwest is Komyshuvakha, which Russian forces came dangerously close to until about two weeks ago, when Ukrainian defenders pushed them back. On Tuesday, the biggest drama of the day was the escape of a black and white cow from Natalia Novitskaya’s yard.

But the ravages of war were still present. In front of Ms. Novitskaya’s house is a crater large enough to swallow a small sedan. The blast from the bomb, which struck on March 16, blew out windows and gave one of her sons a concussion, she said.

Locals also showed off the remnants of what appeared to be incendiary weapons that rained down on their homes and fields in the early days of the fighting.

Despite the relative calm now, officials and residents of Komyshuvakha are preparing for the Russians’ return. On Tuesday, backhoes were digging fresh trenches along the sides of the road and soldiers were stocking up on food at the local market.

“We don’t know what they have in their heads, but we are fortifying,” said Yuriy Karapetyan, the mayor. “We are preparing for the worst and will resist until the last.”