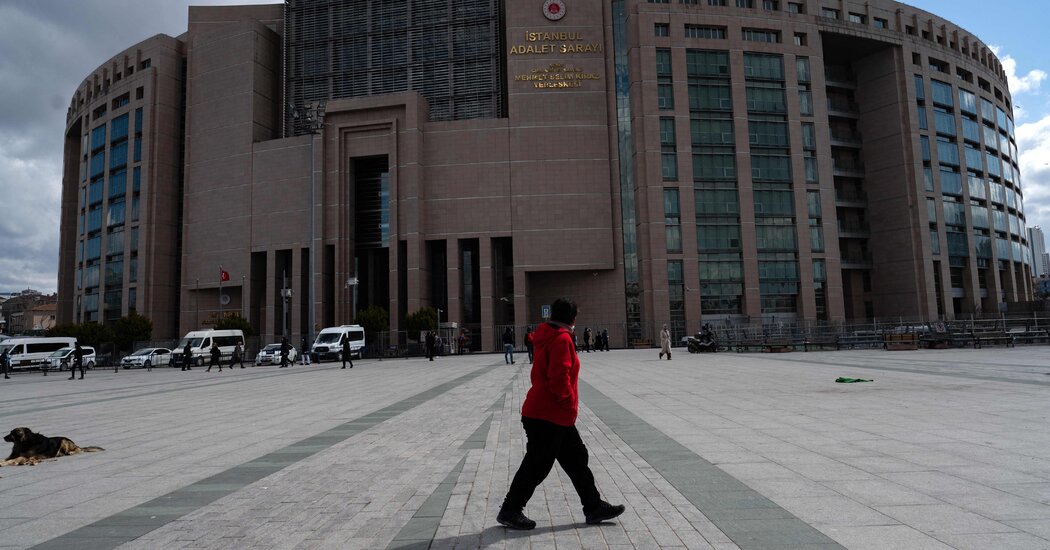 Prominent Erdogan Critic Is Convicted and Sentenced to Life Over Protests


ISTANBUL — A Turkish court on Monday convicted a prominent opponent of President Recep Tayyip Erdogan of trying to violently overthrow the government and sentenced him to life in prison without parole, in a case that has been denounced by human rights organizations and has heightened tensions with the West.

In a very crowded and stuffy Istanbul courtroom the man, Osman Kavala, a well-known philanthropist, was convicted on charges related to popular protests in 2013 against Mr. Erdogan, which the president still sees as among the most significant challenges to his power.

The court also sentenced seven other defendants to 18 years in prison for aiding in an attempt to overthrow the government and ordered them to be immediately arrested. Among the seven is Mucella Yapici, a well known architect and urban rights activist.

The case, which involved more than a dozen individuals, was among the most high-profile in the president’s wider crackdown on the opposition after a coup attempt six years ago. The defendants can appeal.

Mr. Kavala and other defendants were charged and later acquitted, but were put on trial again despite the absence of new evidence, according to their lawyers. Prosecutors said Mr. Kavala orchestrated and financed the protests with money from the billionaire investor George Soros.

Mr. Erdogan has also said that Mr. Kavala financed “terrorists” and participated in the 2016 coup attempt. Mr. Kavala has denied all of the charges.

Nine other defendants were charged, but the court declined to issue verdicts against them because they were not in custody. One of them, Henri Barkey, an American academic, is accused of being in touch with Mr. Kavala at the time of the failed coup, an event Mr. Barkey has denied any involvement in.

A 64-year-old businessman, Mr. Kavala is a well-known figure in Turkey’s civil society. Among his more prominent work to cultivate the intellectual and civil rights landscape of Turkey was the foundation of Anadolu Kultur, an organization that aims to provide wider access to the artistic and cultural heritage of ethnic and religious minority groups.

The refusal to release Mr. Kavala and the decision to renew his prosecution prompted the Council of Europe, the continent’s main institution governing human rights, to officially begin infringement proceedings against Turkey in February.

Turkey, a member of the council since 1950, is obligated to accept the authority of the European Court of Human Rights, which ruled that Mr. Kavala was being held unlawfully. Infringement is a rare action that could lead to Turkey’s suspension from the council, which oversees the court.

Turkey has said that the Council of Europe process was “prejudiced and politically motivated.” Legal professionals have said that many of the judges in Turkey are fearful of running afoul of the government after widespread post-coup purges.

The government’s pursuit of Mr. Kavala and the other defendants, appeared to be motivated by their civil society work, which it viewed as a threat, especially after the 2013 protests turned into a nationwide reaction against Mr. Erdogan’s rule. Ms. Yapici, for instance, has been one of the most vocal critics of the construction boom that Mr. Erdogan’s party has relied on to fuel economic growth during the past decade.

Mr. Erdogan’s rule has become increasingly authoritarian since the failed but deadly coup in 2016. Thousands of people have been arrested, many more were removed from their public jobs, and others felt they had no choice but to leave the country before they were caught up in the president’s dragnet.

Mr. Erdogan pushed through a constitutional referendum in 2017 that cemented some of his expanded authority, establishing a type of presidential system that gave him sweeping powers.

For the president, the 2013 protests have come to represent one in of a series of serious challenges to his leadership. He continues to degrade the demonstrations, which he regards as a foreign-inspired coup attempt against him.

Publicly known as the Gezi protests after the park they were intended to save, the demonstrations quickly spread to almost the entire country, drawing mostly young people from various backgrounds. Mr. Erdogan wanted to turn the park, in the heart of Istanbul, into a shopping mall, but the project has since been shelved.

In his eyes, local groups instigated by foreign entities continued to try to undermine him after the park protests, pushing for anticorruption raids against his allies later that year that eventually led to the coup attempt in July 2016.