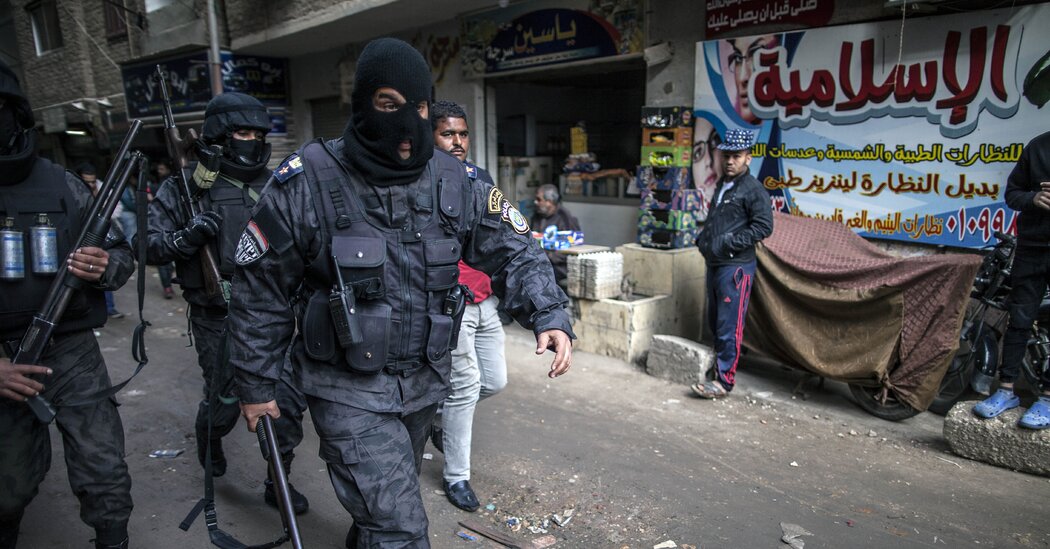 
CAIRO — Ayman Hadhoud, a well-known liberal economist in Egypt, was researching some politically delicate topics like the military’s role in the economy before he disappeared into the custody of the country’s security forces in early February. He had regularly criticized the government and its economic policies on Facebook.

A month after he disappeared, he died suddenly under mysterious circumstances while in custody. But officials did not inform his family that he had died until more than a month after the March 5 date on his death certificate and claimed it was from natural causes, quickly clearing themselves of any wrongdoing.

“These are lies,” said Omar Hadhoud, Mr. Hadhoud’s elder brother, who collected his body from the morgue and said he saw signs of abuse. “It’s very clear his head was broken. Why else would they hide him?”

Photographs of his brother’s body, taken in the morgue of the psychiatric hospital where he died and obtained by The New York Times, showed injuries to his upper body, including what forensic experts said was possibly blunt force trauma, as well as burns on his face and head. Omar Hadhoud said his brother’s skull appeared to be fractured.

Another person who saw the body in the morgue and witnessed the photographs being taken said they, too, noticed visible injuries, patches of discolored skin and small brownish-red spots around his face and head. The person asked not to be named for fear of government repercussions.

The photographs raised suspicions that Mr. Hadhoud, 48, was abused before his death. His family and human rights groups are now calling for a full, independent investigation.

Egypt’s Interior Ministry and head prosecutor, which almost never acknowledge wrongdoing in such cases, have insisted that their own quick investigation conclusively found that the death was caused by a “sharp drop in blood circulation and cardiac arrest” and possibly a Covid-19 infection, adding that the authorities bore no responsibility.

The government has refused to comment beyond the Interior Ministry and prosecution statements.

Egypt’s police and security agencies have a long record of detaining, abusing and torturing their own citizens, especially those whom the government considers political opponents. The country’s human rights record has drawn considerable international scrutiny, condemnation and repercussions, with the United States withholding $130 million from its annual aid package to Egypt this year.

Previously, the emergence of evidence of abuses by the Egyptian security services has sometimes set off domestic protests or international tensions — including a police killing that helped ignite the 2011 Arab Spring uprisings and the discovery, in 2016, of the mutilated body of an Italian doctoral student, Giulio Regeni.

Anwar Sadat, a former member of Parliament who leads the Reform and Development Party, which Mr. Hadhoud belonged to and had advised on economic policy, dismissed the authorities’ explanations as “the usual answers which don’t satisfy anyone.”

Mr. Sadat is the nephew of the former president whose name he shares. He called for an investigation into Egypt’s mental hospitals and the more than monthlong gap between the date on Mr. Hadhoud’s death certificate and its official acknowledgment.

“There are too many question marks,” he said.

Mr. Hadhoud’s case prompted comparisons with that of Mr. Regeni, who disappeared while conducting research on trade unions in Egypt and whose body was found, riddled with marks of torture.

“This is happening over and over again in Egypt,” said Ayman Nour, a prominent opposition leader who is living in exile and was Mr. Hadhoud’s friend. “Anyone in Egypt is vulnerable to such practices.”

Mr. Hadhoud, a researcher who grew up in a poor neighborhood of Cairo and studied at the American University in Cairo on a scholarship, had been working on several politically delicate topics in the year before his death, his brother said. They included what he described as bribery by members of Parliament and how the military had come to dominate Egypt’s economy, suppressing private-sector competition and garnering revenues for itself at the expense of the country’s budget.

The Egyptian authorities frequently detain people for speaking out on social media or for conducting politically charged research.

“He believed someone should break the barrier of silence,” Omar Hadhoud said, adding that friends and family had repeatedly warned his brother that his research was dangerous.

“There were no red lines to Ayman. And he paid for this with his life.”

In statements on April 10 and April 12, the authorities claimed that Ayman Hadhoud had been caught trying to break into an apartment in Zamalek, an upscale Cairo neighborhood, the night he went missing. But he was never charged with a crime.

An April 12 statement by prosecutors asserted that he had schizophrenia, showing “poor concentration and attention, persecutory delusions, delusions of grandeur” and “raving incomprehensibly.”

But Mr. Hadhoud’s brother and acquaintances said he had never been mentally ill.

On Feb. 8, two days after he disappeared, the family learned where he had been taken when Egypt’s state security agency informed them that he was in their custody and summoned another brother for questioning about Mr. Hadhoud’s activities, work and family, Omar Hadhoud said.

But by then, according to the prosecutors’ April 12 statement, officers had already moved Mr. Hadhoud to the Abbasiya Mental Health Hospital in Cairo. Though the family asked repeatedly for his whereabouts and visited several government offices in person, they were not told that he had been sent to the hospital, Omar Hadhoud said.

They eventually heard through friends with contacts in Egypt’s health care system that he was at Abbasiya. When family members went repeatedly to the hospital, however, hospital staff either denied that Mr. Hadhoud was there or said that they would need written permission from prosecutors to visit, his brother said.

Not until April 9 did the authorities officially acknowledge that Mr. Hadhoud was hospitalized, when a police officer told the family to come collect his body. But his death certificate, which his brother provided, said that he had died more than a month before, on March 5.

The authorities have offered no explanation for the discrepancy.

“Without an independent, impartial investigation, Ayman’s family will never know the truth about his disappearance or his death,” said John Hursh, a program director for Democracy for the Arab World Now, a U.S.-based human rights group, which obtained the same photographs independently.

When Omar Hadhoud arrived at the hospital on April 10, he said he was at first told he could take his brother’s body for burial the same day. But then he was told that the authorities had suddenly ordered an autopsy for a few days later.

The photographs of Mr. Hadhoud’s body were taken after the autopsy. But Omar Hadhoud and another person who saw the body before the autopsy said that they saw the injuries and that they were not caused by the autopsy.

Four forensic experts who reviewed the photographs, which were taken surreptitiously, cautioned that they were not high-resolution and showed only part of Mr. Hadhoud’s body. Two said they could not draw definitive conclusions about how he was injured.

But most of them agreed that the photographs showed injuries to his upper body that could have been caused by beatings and burnings.

Dr. Karen Kelly, a medical examiner and associate professor of pathology at East Carolina University, said the photographs appeared to show that before he died, Mr. Hadhoud had received multiple small burns to his face, possibly from cigarettes, and might have received a blow to his face as well.

“Something happened to him prior to his death — possibly, probably torture,” she said. “I am concerned that it was torture.”

She also said that what appeared to be a relatively small incision in Mr. Hadhoud’s chest in the post-autopsy photographs indicated that only a partial, incomplete autopsy had been conducted, one that would not have detected evidence of beating on his back or other internal injuries.

Members of his family, as well as an independent expert, were barred from observing the autopsy, Omar Hadhoud said.

So far, the authorities have refused their requests to turn over the autopsy report.