HomeLatest NewsPelosi and Democratic lawmakers vow the U.S. will stand with Ukraine. 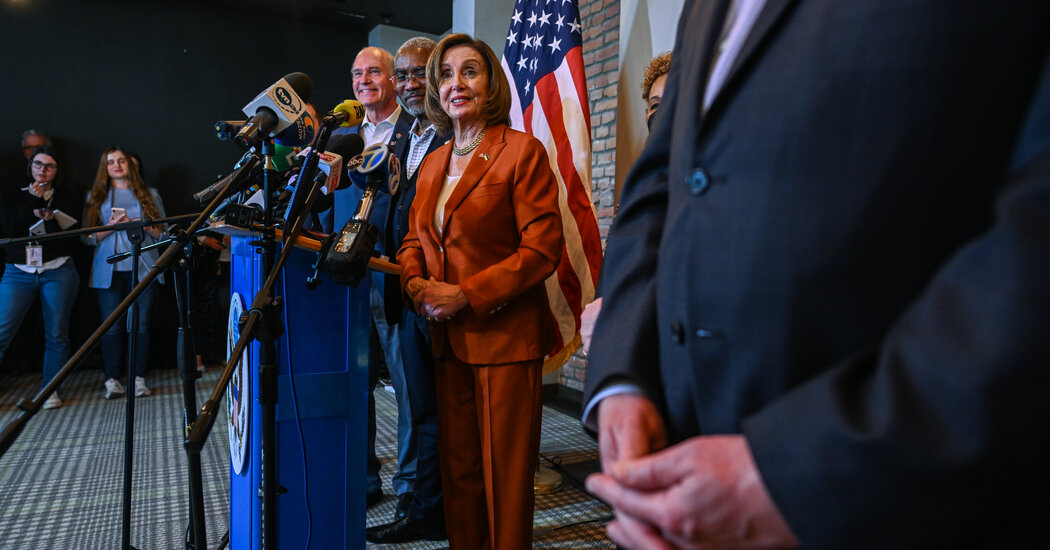 Pelosi and Democratic lawmakers vow the U.S. will stand with Ukraine.


After a secret visit to Kyiv and a three-hour meeting with President Volodymyr Zelensky, Speaker Nancy Pelosi on Sunday pledged broad economic, military and humanitarian support for Ukraine’s government, saying the United States would stand with its ally until Russia was defeated.

Drawing parallels with the American Revolution, the comments by Ms. Pelosi — who led a small delegation of Democratic lawmakers to Kyiv, Ukraine’s capital, on Saturday — reflected the remarkable evolution of American policy toward Ukraine’s struggle against Russian aggression, as the war shows signs of turning into a prolonged conflict.

“America stands with Ukraine until victory is won,” Ms. Pelosi said Sunday at a news conference in Rzeszow, Poland, using a phrase that the other lawmakers in the delegation echoed.

The House speaker insisted that the United States would not be deterred by threats from the Kremlin — “Do not be bullied by bullies,” Ms. Pelosi said — as the Biden administration increasingly casts aside fears expressed by some early in the war that too much American assistance to Ukraine risked a direct conflict with President Vladimir V. Putin of Russia.

Her visit came just one week after Secretary of State Antony J. Blinken and Defense Secretary Lloyd J. Austin III visited Kyiv, after which Mr. Austin said that the United States wanted to see the Russian military not only defeated in Ukraine, but weakened to such a way that it no longer posed a threat to its neighbors.

On Thursday, President Biden called on Congress to provide $33 billion in additional military and economic assistance to Ukraine, a significant escalation in support from the United States.

Ms. Pelosi and the congressional leaders who traveled with her signaled their support for the White House proposal and more.

Representative Gregory W. Meeks of New York, the chairman of the Foreign Affairs Committee, said that the United States would work with allies to refine and expand sanctions to put more pressure on Moscow.

Representative Adam B. Schiff of California, the chairman of the Intelligence Committee, said that he was “in awe of what the Ukrainians have been able to achieve” in beating back Russia’s attempts to seize Kyiv and denying Moscow’s better equipped forces an easy victory.

Representative Jim McGovern of Massachusetts said that Russia was waging war not just against the people of Ukraine, but against the world’s most vulnerable. Ukraine is considered Europe’s breadbasket, and the war, he said, was “exacerbating hunger all around the world.”

“I don’t think Putin cares if he starves Ukraine or the world,” he said. “Putin’s war is evil.”

Ms. Pelosi appeared moved by her encounter with Ukraine’s wartime president, saying Mr. Zelensky was “dazzling.” She described their three-hour meeting as “a remarkable master class of leadership.”

She said that she began her meeting with Mr. Zelensky by quoting Thomas Paine, the American revolutionary. “The times have found us,” he wrote in 1776. “We believe that the time is now for Ukraine,” she said. This fight, she added, will help preserve democracy around the world.