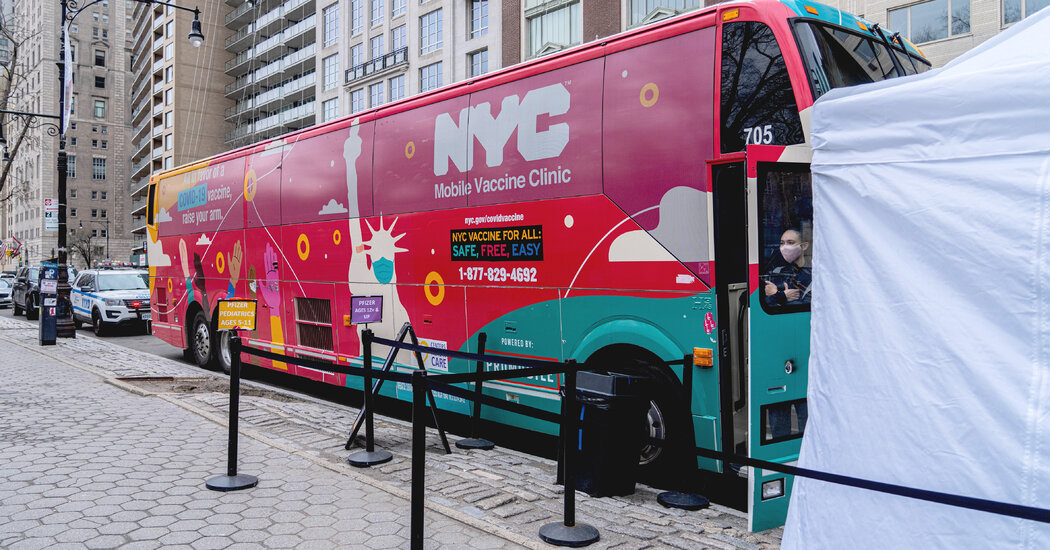 
Gov. Kathy Hochul on Saturday announced that New Yorkers ages 50 or older who received their booster shots at least four months ago, or adults who received the Johnson & Johnson vaccine, are now eligible for a second booster dose. New Yorkers who are at least 12 years old and are moderately to severely immunocompromised are also eligible.

“Getting vaccinated and staying up-to-date with all recommended doses is the most effective way to prevent severe illness and hospitalization, and move safely forward through this pandemic,” Ms. Hochul said.

New Yorkers can schedule an appointment for a free booster shot at one of more than a dozen state-run mass vaccination sites, including Medgar Evers College in Brooklyn; the Queensbury Aviation Mall-Sears in Queensbury; State Fair Art and Home Center in Syracuse; and the University at Buffalo South Campus at Harriman Hall in Buffalo.

Booster shots are a dose of an mRNA vaccine — either the Pfizer-BioNTech or the Moderna.

At a news conference on Friday at City Hall, the New York City health commissioner, Dr. Ashwin Vasan, also encouraged city residents to get booster shots and to wear masks in public indoor settings, pointing out that he was wearing a mask at the news conference. Residents can find a location to get a free shot and make a vaccination appointment at the New York City Department of Health’s website.

The governor’s announcement comes as health officials estimate that BA.2 — the most transmissible version of the coronavirus yet identified — accounts for more than half of new virus cases in the United States, the Centers for Disease Control and Prevention estimated this week. The Omicron subvariant accounts for about 70 percent of cases in the region that includes New York, New Jersey and Puerto Rico.

Even so, Ms. Hochul announced on Thursday that the state would “scale down” its testing sites, as more New Yorkers use at-home tests. She did not offer details on which sites would shut down. New York will retain contracts with testing locations through June, Ms. Hochul said, and would be ready to reopen them if the need arises. All 15 vaccine sites run by the state will remain open.

Although BA.2 is more transmissible than BA.1, it has not shown to cause more severe illness.

Health experts worry that BA.2, which has fueled case surges in Europe and Asia, could lead to another wave of the pandemic in New York, and possibly the country. They believe that the true number of cases in New York might be higher than the data suggests, because many people are testing at home, with no official reporting of results.

That has health officials urging New Yorkers to remain vigilant.

“As we have seen with the recent increase of the Omicron subvariant BA.2, Covid is still with us,” Dr. Mary T. Bassett, the state health commissioner, said in the statement on Saturday. “These safe and effective vaccines remain free, including the second booster.”