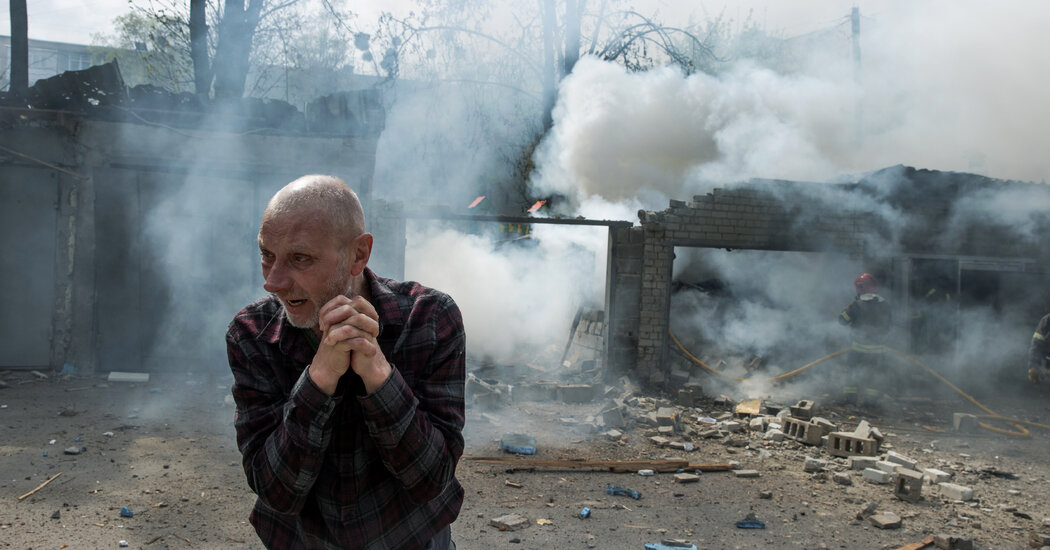 
Ukraine has defeated Russia in the first phase of their war, and a second phase has begun.

Having failed to topple Ukraine’s government, Russia has narrowed its ambitions and is concentrating on the eastern part of Ukraine known as the Donbas region. Vladimir Putin’s new goal appears to be severing Donbas from the rest of Ukraine and creating puppet republics there.

This new phase brings some big advantages that Russia did not have when it was attempting to conquer all of Ukraine. But Putin and his military also face some of the same challenges — including low morale — as before. The outcome remains highly uncertain.

(Here’s a Times overview of the coming battle.)

Today’s newsletter explains the battle for Donbas, with help from Times reporters around the world. We will start by looking at Russia’s new advantages and then consider Ukraine’s continuing advantages.

When I was talking with Eric Schmitt — a Times senior writer who has been covering military issues for most of the past three decades — he offered a useful analogy for thinking about the war’s new phase.

Until now, much of the fighting has occurred in parts of Ukraine that roughly resemble an American suburb, Eric explained. There are houses, office buildings and side streets where Ukrainian forces can hide and then attack Russian soldiers. This physical geography leaves civilians vulnerable — but benefits troops that are using guerrilla warfare to defend territory against an advancing army.

Much of the Donbas region is different. Its geography more closely resembles the plains of Kansas than a New York City suburb. “It’s much more wide open,” Eric said. “There are fewer places for Ukrainians to pop out from.”

Today, there are actual trench lines in Donbas, stretching over hundreds of miles and sometimes separating areas controlled by Ukraine from those controlled by Russia. This terrain will allow Russia to use its many tanks, large missile systems and other heavy weapons systems; Ukraine’s military has far fewer of these. The shoulder-fired missiles that Ukraine has been receiving from the West, and using to great effect over the past two months, will probably be less helpful in Donbas.

The newly focused battlefield has other tactical advantages for Russia, too:

In addition to military tactics, public opinion in Donbas also appears to be more favorable to Russia than it is elsewhere in Ukraine. Shortly before the war, about 30 percent of the region’s residents wanted it to become part of Russia, while about another 10 percent favored independence, according to a poll by academic researchers.

In areas currently controlled by Russian-backed separatists — which make up more than one-third of Donbas — a slight majority favored leaving Ukraine. That’s very different from the situation in the rest of the country, where Ukrainian patriotism is widely shared.

Together, Russia’s advantages offer reason to believe that it may fare better in the next phase of the war than during its humiliating defeat and withdrawal in the initial phase.

But before you assume that’s inevitable, it is worth remembering something: On paper, Russia also seemed likely to win the first phase of the war. Military planners in Moscow expected that they would be able to topple Ukraine’s government within days or weeks. Many experts in the U.S. and Western Europe — and many westerners in Ukraine when the war began — assumed the same.

Its air force was not able to dominate the skies over Ukraine. Its military units rarely communicated over encrypted lines, allowing Ukraine to intercept its messages. Many Russian troops did not expect to invade Ukraine and were not happy their superiors ordered them to do so.

“The vehicles are still poorly maintained, troop morale will remain low,” Michael Repass, an American major general who has worked with Ukraine for years, told The Times.

Even if winning control of Donbas is an easier task than overwhelming all of Ukraine, it is not easy. Ukraine has highly motivated troops, more of whom can now shift to Donbas. And the West is racing to supply Ukraine with tanks and heavy, longer-range artillery, as well as the shoulder-fired missiles that proved so effective around Kyiv. “How this logistical race goes could well shape the outcome of the war,” this Times story explains.

Public opinion in Donbas may also be shifting away from Russia, because of the invasion. “If a bomb falls on your house, latent sympathies change into hard antipathies,” Michael Schwirtz, a Times reporter in Ukraine, said. At the start of the war, he was reporting from Kharkiv, an eastern Ukrainian city where — as in parts of Donbas — the primary language is Russian. Yet the invasion nonetheless made many Kharkiv residents “viciously, viciously angry,” Michael said.

The Institute for the Study of War, a military research group in Washington, offered this summary:

Russian forces may be able to gain ground through the heavy concentration of artillery and numbers. However, Russian operations are unlikely to be dramatically more successful than previous major offensives around Kyiv. The Russian military is unlikely to have addressed the root causes — poor coordination, the inability to conduct cross-country operations, and low morale — that impeded prior offensives.

The bottom line: A quick victory — by either side — seems unlikely. Then again, war is often very difficult to predict.

Marine Le Pen has softened her image during her latest run for president of France, but she’s as dangerous as ever, Rim-Sarah Alouane writes.

Surprises: Harry Styles and Shania Twain — both draped in sequins — belted her hit “Man! I Feel Like a Woman!” “This lady taught me to sing,” Styles said.

One more thing: The composer Danny Elfman — who took his shirt off during his set — performed a wild mishmash of his works, including the theme from “The Simpsons.”

The pangram from yesterday’s Spelling Bee was beatific. Here is today’s puzzle — or you can play online.