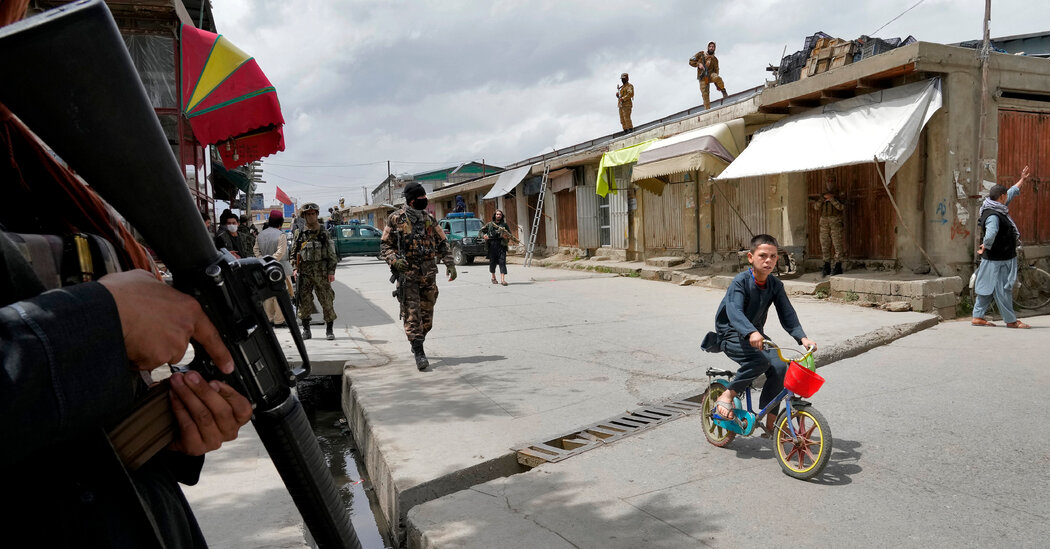 
KABUL, Afghanistan — Several explosions outside an education center and a public high school in Afghanistan’s capital on Tuesday killed at least six people and wounded at least a dozen more, many of them students, including one as young as 7.

The attacks, whose final casualty figures could be much higher based on reports from the area hospitals treating the victims, were a gruesome reminder of the dangers that persist in Afghanistan despite the Taliban’s promise to establish security across the country after 20 years of war.

Both the education center and the school targeted on Tuesday are in the Dasht-e-Barchi neighborhood of the capital, Kabul, an area dominated by Shiites that was frequently targeted by both the Taliban insurgency and other militant groups under the previous Western-backed government. In a particularly devastating attack last year, bombs were set off outside a girls’ school in the neighborhood, killing at least 90 people, many of them teenage girls leaving class.

The explosions on Tuesday stoked deep-seated fears among the Shiite community that they remain greatly at risk despite pledges by the Taliban, a movement of mostly hard-line Sunni Muslims, to end decades of bloodshed against them. Scores of Afghan Shiites were killed under the Taliban’s first period of rule in the 1990s.

In October of last year, suicide bombings at Shiite mosques in one northern and one southern city together killed more than 90 people, and an attack on a Shiite-dominated area of Herat, a major city in western Afghanistan, killed at least six people in January. The Islamic State’s affiliate in Afghanistan, which considers Shiites heretics, claimed responsibility for all three attacks.

No group immediately claimed responsibility for the attacks in Kabul on Tuesday.

The blasts came as the ability of young Afghans to receive an education has become a sensitive issue for the new government, after the Taliban abruptly reversed their decision to allow girls’ high schools to reopen last month, drawing widespread condemnation from Western donors.

The devastation on Tuesday began around 7 a.m. when a blast rocked the Mumtaz Educational Center, a private facility offering tutoring for boys and girls studying for the nationwide university entrance exam.

Around three hours later, the nearby Abdul Rahim Shaheed High School was hit by at least three explosions, Khalid Zadran, a spokesman for the Kabul police, said on Twitter. Thousands of students attend the public high school, among the largest in the western part of Kabul.

Mr. Zadran said that at least six people were killed and 11 more wounded in the attack on the high school.

In the attack on the education center, five students were injured, one critically, when an explosion went off in a classroom, according to a school employee who requested confidentiality because Taliban security officials had instructed school staff not to speak with news media.

In interviews with The New York Times, hospital staff members at six hospitals across Kabul reported a total of 15 killed and 49 wounded in the two attacks.

Witnesses of the high school attack described a scene of utter devastation.

The explosions at the school went off just as 12th-grade students were leaving classes for the day, according to Ghulam Haidar Hussaini, the principal, who was standing about 20 yards from the school’s gate when the first explosion occurred.

“I think there was an embedded mine that exploded, and after two minutes someone threw a grenade and another explosion happened,” he said. The first explosion killed four students and wounded around seven others, he added.

The police have not commented on the nature of the explosions though an investigation is underway, Mr. Zadran said.

Atiqullah Haidari, 21, heard the explosion from a tailor’s shop where he works and immediately thought of his 17-year-old brother, Nasullah Haidari, a ninth grader at the school. Rushing to the school grounds, he found a horrific scene, with severed legs and hands strewn across the street. Injured students were being carried into taxis and put on the backs of motorcycles, and then taken to nearby hospitals.

Fearing his brother was injured or killed, Mr. Haidari sped to one hospital to look for him while one of their uncles went to another.

“We were very worried and just thinking about his future, imagining if he was alive or dead,” said the uncle, Mahramali Faizi.

Within an hour Mr. Faizi found his nephew at the Mohammad Ali Jinnah Hospital, bloodied from shrapnel wounds in his legs and neck. The boy received initial treatment and was then transferred to Emergency Hospital, one of the main surgical centers in the city.

By the early afternoon, dozens of men had joined Mr. Faizi outside the Emergency Hospital, all waiting for news of their brothers, nephews and sons.

Ali Madad, 23, grabbed his cousin’s bicycle and headed to the school after he heard the explosion. All he could think about was his 19-year-old brother, Mohammad Taqi Rahimi, a 12th grader there. When he arrived dozens of mothers were shouting and sobbing as security officers cordoned off the school grounds.

Mr. Madad then rode to one hospital looking for his brother and then another. Increasingly desperate, he arrived at Emergency Hospital and, upon learning that his brother had been taken in for surgery here, collapsed.

“At that time I was so angry,” he said. “Why was a school targeted again?”

Qasim Jaffari, 25, said that his mother had taken his 7-year-old cousin, Asma, to enroll her in the first grade early Tuesday morning at the Abdul Rahim Shaheed High School, whose campus is used for grades one through 12. Her father, a farmer, sent his daughter to Kabul to get a better education than she could in their village. Elementary-aged girls can still attend school.

Both Mr. Jaffari’s mother and Asma were injured in the blast, he said.

“The schools in Shiite areas are always targeted. The previous government could not ensure our security, this government cannot,” he said. “We are in a lot of pain, but who should we complain to?”

Facebook
Twitter
Pinterest
WhatsApp
Previous articleFor passengers in midflight on Monday, there were cheers and alarm as a U.S. mask mandate ended.
Next articleAn Immersive Show Taps ‘an Oracle’ for a Spin on Greek Myth