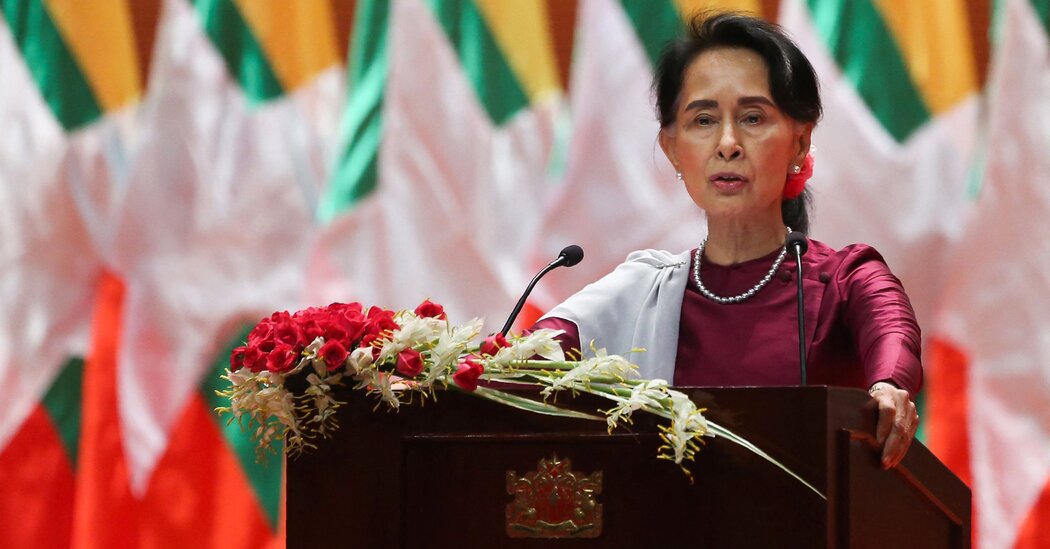 
A court sentenced Myanmar’s ousted civilian leader, Daw Aung San Suu Kyi, to five years in prison on Wednesday after finding her guilty of corruption for accepting about $1.3 million in gold bars and cash from a close political ally.

The conviction was based largely on the testimony of the former chief minister of Yangon, Myanmar’s largest city, who publicly confessed last year that he had delivered $600,000 in cash and about 25 pounds of gold to her in shopping bags.

Ms. Aung San Suu Kyi, whose trial was closed to the public and the news media, has called the charge “absurd.” The court has prohibited her lawyers from speaking publicly about the case. Her ouster in Myanmar has rattled other Southeast Asian nations and is expected to be a major point of discussion during President Biden’s meeting with leaders from the region in Washington next month.

Supporters of Ms. Aung San Suu Kyi who are familiar with the legal proceedings said the prosecution had presented no evidence — aside from witness testimony — that she received the gold bars and currency.

Ms. Aung San Suu Kyi, who was arrested on Feb. 1, 2021, as the military began staging a coup, has been charged with 17 criminal counts that her defenders maintain are fabricated.

She was convicted earlier on five lesser charges and sentenced to six years in prison. If found guilty on all the remaining counts, including nine more corruption charges, she faces as much as 163 years in prison.

The military, which ruled the country for nearly 50 years before allowing civilians to begin sharing power in 2010, seized full control again last year and arrested hundreds of elected officials, most of whom remain in prison.

Mass protests erupted and the military responded by shooting civilians in the streets. A national strike against the junta has crippled the economy, and the health care system has collapsed in much of the country.

Since the coup, the security forces have killed at least 1,798 civilians, and the regime is holding more than 10,300 political prisoners, according to the Assistance Association for Political Prisoners.

In rural areas, the military has bombed rebel strongholds and torched villages, driving thousands of people into the jungle. Hundreds of armed resistance groups have sprung up to fight the Tatmadaw, as the military is known in Myanmar.

But the junta has yet to carry out any of the measures, and ASEAN has been ineffective in pressuring the regime.

Special envoys appointed by ASEAN have not been allowed to meet with Ms. Aung San Suu Kyi. Nor have the envoys met with the pro-democracy National Unity Government, which was formed by elected officials who have escaped arrest and leaders of ethnic groups who have long opposed military rule.

The ASEAN Parliamentarians for Human Rights, a group of current and former members of parliaments, said that the five-point consensus had failed and that it was time for Southeast Asia’s leaders to take a more aggressive approach, including suspending Myanmar’s membership in ASEAN and imposing sanctions and travel bans on junta leaders.

Understanding the Coup in Myanmar

The coup was preceded by a contested election. In the Nov. 8 election, Ms. Aung San Suu Kyi’s party won 83 percent of the body’s available seats. The military, whose proxy party suffered a crushing defeat, refused to accept the results of the vote.

The regime is cracking down on dissent. A rights organization that monitors detentions in Myanmar said in March that the military junta that seized power following the coup is currently detaining 10,000 political prisoners, adding that many have been tortured and are being held in deplorable conditions.

“The question to ASEAN leaders now is: Will you allow the military to continue committing war crimes and crimes against humanity, and threaten the human security and economic development of the region for another year?” the group asked in an anniversary statement on Sunday.

Under the earlier period of military rule, Ms. Aung San Suu Kyi became an international icon of democracy and spent a total of 15 years under house arrest between 1989 and 2010. She became a Nobel Peace Laureate and led her party, the National League for Democracy, to three landslide victories but was allowed to form a government only once, in 2015.

Barred by the military from becoming president, she took the title of state counselor. But she damaged her global reputation by not speaking out against the Tatmadaw’s brutal ethnic cleansing of Rohingya Muslims in 2017.

Since the coup, she has been kept under house arrest in undisclosed locations near Naypyidaw, the capital. Her trials are being held in a house in Naypyidaw that was converted into a courtroom. Ms. Aung San Suu Kyi, 76, was previously found guilty of possessing walkie-talkies, breaching Covid-19 protocols and inciting public unrest. The court could have sentenced her to as much as 15 years on the corruption conviction.

The main witness against her in the corruption trial was U Phyo Min Thein, the ex-chief minister of Yangon and a prominent party leader and fund-raiser.

In a televised confession shortly after the coup, he said he visited Ms. Aung San Suu Kyi at her home on three occasions in 2017 and 2018 and each time had brought her bags containing gold bars, bundles of hundred-dollar bills, expensive silk items and food.

He gave her the gifts to win her favor, he said, and told her she could use the money for her “personal needs,” to fund the National League for Democracy or for the Daw Khin Kyi Foundation, a charitable organization that she had established in her mother’s name.