HomeLatest NewsA family of six walks for days to escape the besieged city... 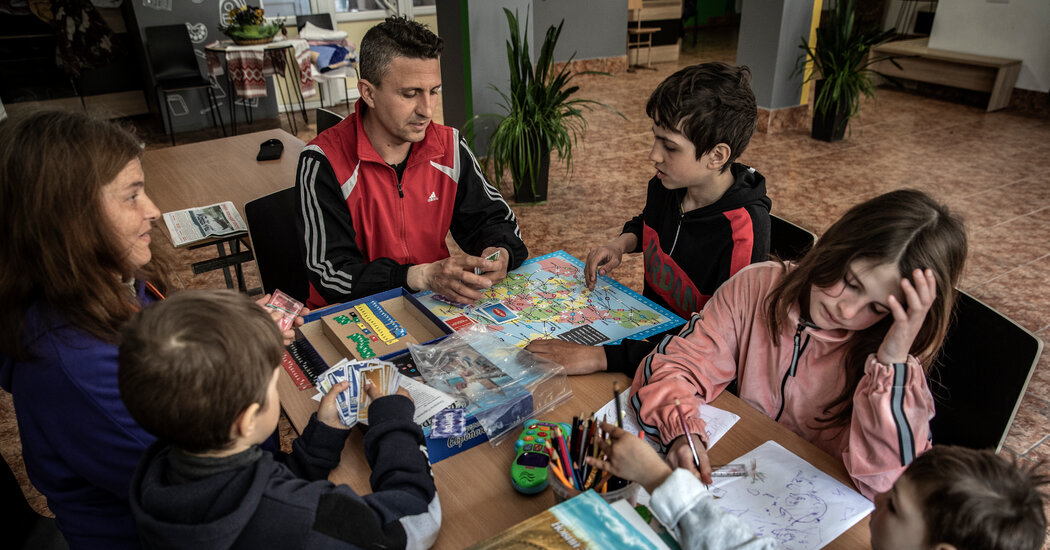 A family of six walks for days to escape the besieged city of Mariupol. Here is their story.

Mr. Tishchenko, a furniture salesman, and his wife, Tetiana Komisarova, arrived at this train station in western Ukraine after walking for five days with their children to reach safety. They did not know where they were going. But they knew it was better than where they had come from — Mariupol in eastern Ukraine, which has been bombarded by Russian forces for weeks.

The family’s home was far from the steelworks mill where soldiers are sheltering underground, holding off Russian troops trying to take the city’s last vestige of territory held by Ukraine.

But Mariupol has been devastated by fighting, with shortages of medicine, food and electricity.

The couple did not own a car. When conditions became unbearable last Sunday, they packed the fraying bags with clothes and food and started walking with their four children. Their oldest child is 12, and their youngest, at 6, suffers from microcephaly, a rare condition that requires regular neurological monitoring and psychiatric consultations.

They left behind Mr. Tishchenko’s elderly mother, who could not walk, and their gray-and-white cat, named Mosia by Uliana, the 6-year-old.

Their journey out of the city was macabre: decomposing bodies, shelling in the distance, Russian military convoys and checkpoints.

“The city was turned into one big cemetery,” said Ms. Komisarova, 42. “We lived near Shevchenko Boulevard. There was a strip of land between two roads, and corpses were lying there for a long time. I’ve never seen so many dead bodies in my life.”

At each Russian checkpoint, they would say Ms. Komisarova had a sister in the next town. And at each checkpoint, perhaps moved by a large family struggling with children, the soldiers let them through. Some showed them photos of their own children.

“At one of them, a Russian soldier started asking us where we were going,” she said. “I said ‘Orikhove’. And then he said: ‘No, don’t go there. It’s being shelled. Go somewhere west.’”

She said they would stop in villages where people would let them stay.

In a village near Rozivka, she found out that the friend she had hoped to stay with had escaped. So they spent the night in a deserted house with other displaced people.

“We made a fire in a clay oven to keep warm, and then the neighbors came. They boiled potatoes with fried eggs for us. They fed us well,” she said.

On the fifth day, they were picked up by a man with a load of radishes and taken to the train station in Zaporizhzhia.

Arriving in Lviv, Ms. Komisarova and the children waited outside the station by the pile of luggage as Mr. Tishchenko went off to ask where they could find shelter. Looking around at the vehicles coming and going, the former high school teacher said she had forgotten what traffic looked like.

Her eldest daughter, Anna, 10, carried a Hello Kitty backpack and a green stuffed toy identical to the one her sister had been given along the way. A volunteer gave the children Easter chocolates they put in their pockets but did not eat.

Mr. Tishchenko, 37, has not been able to reach his mother but the children said their father had boarded up the shattered windows before they left, and they believed their grandmother would be all right.

They again hoisted the bags onto a street tram to take them to a resettlement office where they would be given a place to stay in a school that had been turned into a shelter for the displaced. At the office, one of the guards wiped tears from her eyes as she sat with the children while their parents were being interviewed.

Ms. Komisarova, a former Ukrainian language and literature teacher, said they intended to return when Mariupol was safe again.

“Honestly, we don’t have a specific plan where to go until then,” she said. “I remember the moment when we reached the first Ukrainian checkpoint and saw our flags and heard a soldier speaking our language. I was just sitting in the car and crying. We really want Mariupol to be Ukrainian again.”